Kitson Arts Alliance Events & Programs
Over the past six years, we have developed a number of ongoing programs that offer consistent arts programming throughout Northeastern Pennsylvania. These programs include:
Local Art on Display
We mount, manage, and promote regular art exhibits featuring the work of local artists at a number of high-traffic locations in Wyoming and Bradford counties in Pennsylvania. These include:

The Kitson Arts Alliance is seeking musicians, poets, collectors, and any other artists who would like to share their art form while being recorded on the glamorous red couch at Tunkhannock’s Kitson Gallery. In addition to performers, we’re looking for anyone who would love to share their passion for collecting – those who love to go out picking or treasure hunting, digging in dumps, old homes, grandma’s attic, flea markets, fairs, or antique shops.

We would love to hear your story and learn all about your passion for collecting. We are offering up our large vintage-style red couch for you to be recorded as you share your passion. We will be providing each participant with exposure on all of our Facebook pages, YouTube, and the kitsonartsalliance.org and northbrancharttrail.com website.

To express interest and discuss details, please contact Patrick Robinson at 570-499-5484 or patrickrobinson.ugs@gmail.com.

This program provides art lovers with an opportunity to have well known national cartoonist Bob Heim hand draw cartoons to be given as gifts!!! Bob will hand draw five original cartoons with at least one customized to the recipient’s interests. He will then mail them, one per week for five weeks to whomever you decide to give this amazing gift of art to. They are hand drawn on heavy art paper and each one is personally signed by Bob Heim. You may contact Patrick Robinson at 570-499-5484 (please leave a voicemail and we will respond within 24 hours or less) and we will make arrangements for you to speak with Bob and provide interesting details of whom you are gifting the cartoons to, so that at least one of the five cartoons can be specially personalized to that person.

This is a great opportunity to own original hand drawn cartoons signed by Mr. Bob Heim, as his works for this quantity of cartoons has sold for over $1,250.00, but with our special arrangement with Bob through Kitson Arts Alliance you can get this for $595.00, so that’s $655.00 off of Bob Heim’s original art!!!

ABOUT BOB HEIM: Bob Heim has sold his cartoons to publications that include Barron’s and American Banker, as well as The Washingtonian, New Woman, Chicago, Cincinnati, Gallery, and King Features Syndicate. His work has appeared in print ads, as book illustrations, and in numerous house organs including one for employees of E.F. Hutton. A collection of previously-published banking cartoons sold nationally and a more recent book containing cartoons on a wide variety of subject matter, “That Was the Year We Had Aunts,” is presently being promoted. In January 2005, Bob became the first cartoonist to be featured with a one-man show in the University Medical Center Gallery at Princeton. He has also appeared live on WUSA Channel 9 (the CBS affiliate in Washington, DC), which carried his work on one of its websites. A book for children of all ages, titled “The Squeaking Earl,” was published in 2009 and is available on such websites as Amazon and Barnes & Noble, and through bookstores.

Through KAA’s Art Education program, local artists present a four-week series of two-hour after school classes to K through sixth graders at the Northeast Bradford School District throughout the entire school year. Since we started this program in 2019, various artists have covered such diverse topics as music, culinary, oil, acrylic, watercolor, mixed media, clay, and agricultural forms of art.

The Kitson Arts Alliance has become the organization that a number of event producers now turn to as the source of exceptional live music acts. As such, we coordinate the entertainment for such popular annual events as Founders Day and the Hometown Fall Fest in Tunkhannock and we provide acts for the Endless Mountains Heritage Region’s summer events each year.

Our North Branch Art Trail program produces the annual Lake Carey Arts Fest and, new for 2022, will also be producing the exciting new concert series, Summer Sessions 2022, a new 12-week series of live music that will be held at The Old Carter Barn at Lake Carey from late-June to early-September. 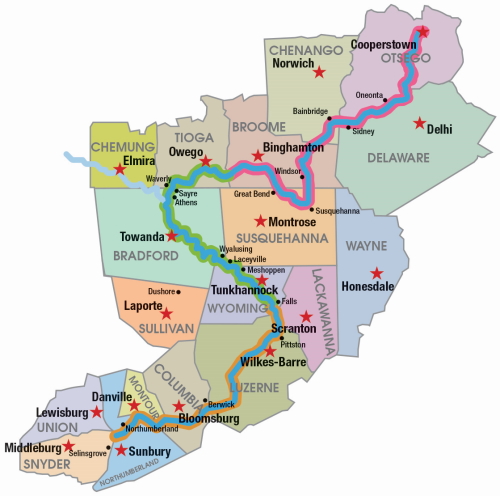